Listen to Too Close To Vomit's
Muzak for the Molassess

Videos of blowing shit up in en concert:
Studio and Gear:


I will comment a bit about studio philosophy. All instruments and recording devices are analog, including synths, drum machines, effects and processing. The digital vs. analog fight is not one worth getting into, but there are a number of reasons staying analog is important to what we do. However you make your records is fine with me, but
this is how make them.

As a live sound engineer for small, local bands, I work with a lot of groups that sound amazing on stage but their recordings are hard to stomach. I could recommend some very simple solutions. One is get a 4 track or 8 track cassette machine. I swear it is a magic sauce that will help your recordings sound less brittle and give them some life, especially for bass/drums/guitar type stuff. Secondly, use fewer mics. Instead of putting a mic on every piece of the drumset, how about not mic-ing the drumset? But generally, focus on getting a room sound. Use a condenser or ribbon, something you can just set up and not think about. If you are still not satisfied with the sound, then place mics accordingly where they are needed, maybe in the bass drum or something. The multi-mic method is how guitar chains sell you more mics, but it's also easy to fuck up. And my favorite albums were recorded using only one or two mics anyway.

The recordings I love most are from the pre-transister, pre-multi tracking days, and those are the records we emulate. Since the 1950s, technology has sought to make recording cheaper, smaller and more reliable. It has not improved the sound quality. I like the sound of tubes, ribbons and tape. And as much as we find Chuck Berry's playing to be amazing, the way the tubes in his amp break up the high notes is so exciting, and critical to his sound. For the surf music of the 1960s, which is my very favorite, the guitar tone, designed by Leo Fender himself, is a main feature of the genre. I worked for a bit with the guy who had some big radio hits in the early 90s. He was so much more fun in person than on his big recordings. The recording style that became normal in the 1980s swallowed his talent whole. This is partly because of technique and tricks, such as click tracks and gated snares. Who on earth prefers an 80s snare sound? But I've decided that things recorded in the 1960s, generally speaking, just sound better than things recorded in the 80s and beyond, so that's where I'm going.

Then there are simpler reasons for it. Working with the old stuff is fun! Working all analog is fun! Having fun makes records better, regardless of how it's recorded. Working with a computer provides a huge distraction, while working on tape allows me to put all devices away and focus. Rewinding gives me a few seconds to think and make decisions. And I've used these tape machines for decades; they are what I know and that means less friction. Software recording programs have plenty of menus and plug in where you can find whatever you want and do it easily. Doing it outside the box is a little hard, but it sounds better and is more fun. And vintage gear is so ingteresting to me that perahps I only make music as an excuse to play with it.

But there are some major downsides, namely the cost and maintenance. Tubes go bad and must be replaced. People today will hear it digitally anyways; all the music you are listening to by us has been digitized anyway. Tape machines must be aligned and calibrated regularly; belts and gears break. I'd love to do more work on reel to reels, which would sound really good, but simply cannot afford it. A lot of people get excited about analog sound and see a lot of value in analog synths and guitar pedals, but then they look into tape and realize it's kind of a bitch, and the cost of good tape machines is really fucking high, verses digital recording which is free. Yup. We are poor musicians and can't do it. Hence I stay with Tascams. The multi-track cassettes generally sound better than most people would assume. But still, they break. I have been working on album and need about 6 more months to finish it, but the 8 track broke and I can't access the tapes. In the mean time, I bought the cheapest 4 track I could get and started on another album. That 4 track distorts more and doesn't sound as good as the 8 track, but it works. Also I bought a lot of gear when I had money, but have often been forced to sell essential pieces of gear. I began working with midi a few years ago, and it opened up a whole new way to compose. But I broke my arm and needed to pay rent, so I sold much of the midi gear.

Anyway, this is the project. This is what I do. And it is also one of the biggest obstacles I face working and why your support is important.

All voice and instrument sounds are projected into the room, where they are mutated by air, walls, and common basement pollutants, picked up by a an RCA 44 microphone, amplified by an Ampex MX-10, and tracked to Maxell XLII tape on a Tascam 488 MkII 8-track cassette recorder (unles it's broken, in which case a Tascam Porta 02 is used). Songs are then mixed to Maxell II-S, and may be moved to open reel later if my deck gets fixed. All recordings are mono for maximum compatibility, and I was surprised by how many people's sound systems are missing a channel when I released albums with hard pans. All digitized versions are copied from the XLII-S.

Midi is used on some songs for composition and recording. Yes, I'm contradicting myself a bit here, but I edit midi on the computer then use it to control analog synths. I use a Roland MKS-7 for the compesition process, but use a minimoog when transferring to tape. The drum machine is an 808. I got this stuff when I had a good job and no rent, and before the prices went insane. SMPTE is used to sync the tape and MIDI, and you can sometimes hear artifacts in the final mix. I will frequently re-record the whole thing using drums/bass/guitar, but I enjoy it as a composition tool.

My bass is a 1968 Fender Corando II that I picked up in 2000. A friend helped me build a guitar buy buying all the pieces seperately, and it is essentially a 1959 baritone strat. I play both through a 1968 Dual Showman.

We have a seperate YouTube channel for studio and behind the scenes videos here.
Gear is often for sale in our Reverb channel. 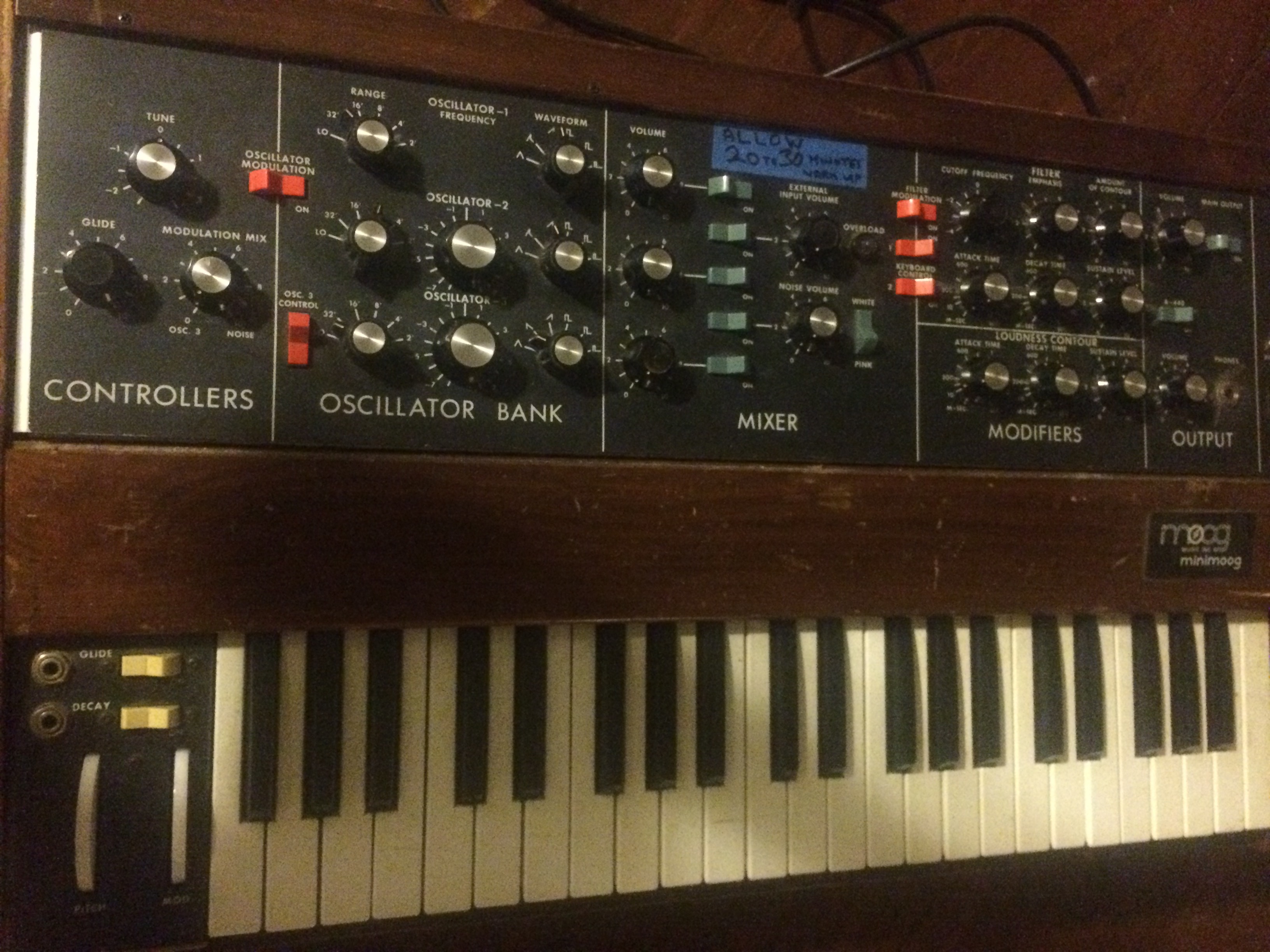